skip to main | skip to sidebar

Check out the link to this article about the ongoing HUMMER conversion, but more importantly, check out the responses at the bottom. This makes it all the more important to do this work, because many people still think a car that gets 9 miles to the gallon is a good idea. 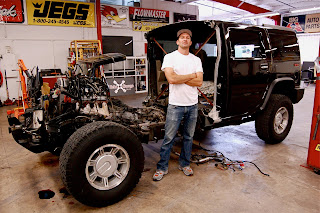 There comes a point in art and life when you have to take a risk and put it all on the line for what you believe in, so we bought a Hummer H2 and destroyed it the same day, for the sake of art.

Below is how the last 36 hours has gone.

After a frantic search to find a HUMMER at a good price, I finally located one in Orlando (of course, because they really need huge four wheel drive trucks in Orlando). Since these things are still so desirable, several other people were also interested and were on their way to check it out, including a person who was flying in from New York. So it was basically a race to see who would get there first. We made the two hour drive in record time, and got the vehicle.

Though I have been obsessing about this project for almost a year, I had never actually been in a HUMMER H2, until I bought one, and let me tell you all the stereotypes about them are true. They truly are huge, gas, guzzling tanks…

I made the drive back to Slicks Garage in Palmetto, and right away Slick was ready to get to work. He was like a kid with a new toy… that he wanted to take apart.

So we all basically work for about 36 hours and below is the result. There is no turning back now, we truly are going back to the Futurama…. 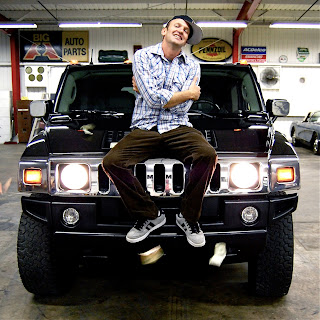 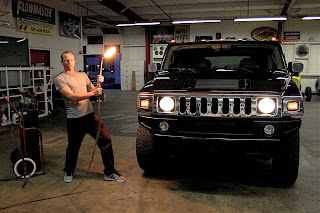 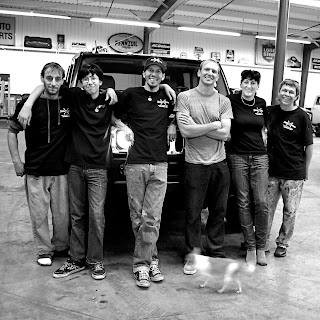 the most amazing people ever! Slick and his crew make it happen. 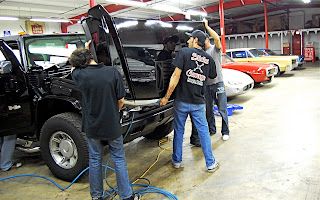 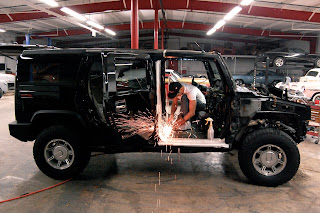 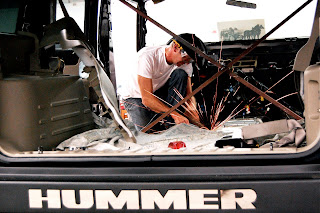 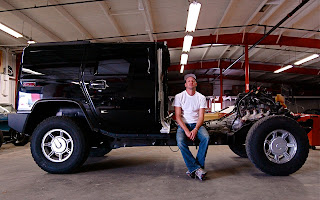 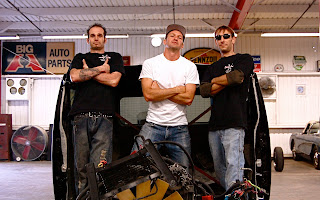 There is no way to express how hard working and committed everyone at Slicks Garage is. They are truly some of the best people I have ever worked with and none of this would be possible without them! 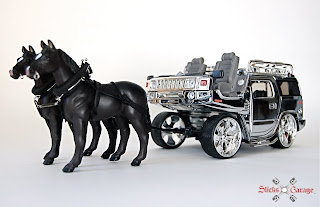 We have partnered with Slicks Garage to create... The Futurama!

Slick and Jane are by far some of the nicest people I have ever met. I walked in to their shop the other day, told them what I wanted to do and they instantly offered their shop and expertise to help make it happen under our crazy deadline of having this up to NYC for the Armory Show.

As Jane is fond of saying..." It is so crazy, that it is right up our ally"

The finder and broadcaster of all things cool, Cool Hunting writes a great review about the Futurama at art Basel!

the Futurama at Art Basel

The idea of the futurama was unveiled at SCOPE during Art Basel Miami 2009. Art Basel was probably one of the craziest experiences of my life... total art overload! From the good the bad and the bazar, Basel had more work that any one person could possibly see in three days, and believe me, we tried! 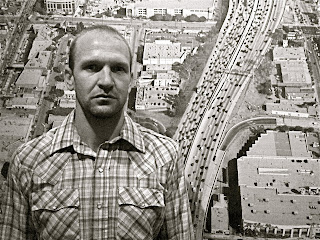 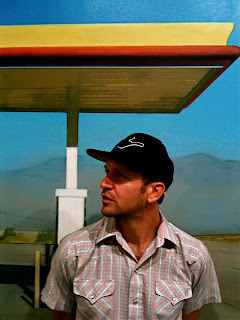 Here are some photos and a video of the Futurama at SCOPE. 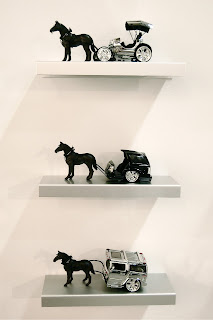 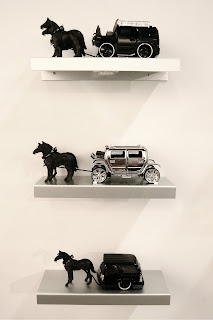 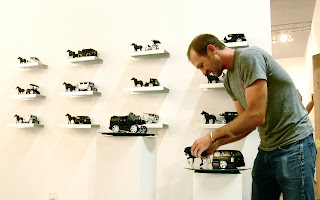 The two spinning cars play video on a tiny screen inside the car, and the play audio on speakers wired into the car.

You're going to what?

Yes that's right, I'm going to take a real HUMMER H2 or Cadillac Escalade, cut it in half and turn it into a horse cart.

I have always been interested in exploring contemporary issues by deconstructing and re-contextualizing iconic symbols to gain perspective and understanding about the world in which we live. This has been even more important to me in the current state of global economic, environmental, and security instability. This project uses an American symbols of power and status to questions our future by looking at a past response to excess and subsequent collapse.

CONTEXT: EVERYTHING BOILS DOWN TO ECONOMICS
The excess of the roaring 20’s were punctuated by Ford’s inexpensive Model T making it possible for virtually everyone to own a car. Realizing that at some point everyone who could afford a car would have one, General Motors (GM) introduced “planned obsolescence” by annually changing its models, allowing for the extravagance of regular new cars and inventing consumerism as we know it. GM also began extending credit through the GM Acceptance Corp at a rate of 30% interest. This occurred at a globally unstable time, when the debate over bank regulation and American consumerism raged. Americans responded to the advertising doctrine of 1926 saying, “Every free-born American has a right to name his own necessities” and the list of necessities grew.

When the stock market crashed in 1929, leading to the Great Depression, indebted Americans defaulted on their loans worsening the depression and found themselves unable to pay for basic goods including gasoline, so their cars sat idle. The solution in the rural south became to cut the car in half, attach poles to the front and hitch it to a horse. The resulting contraption became known as a Hoover Cart after President Hoover who was blamed for the depression. 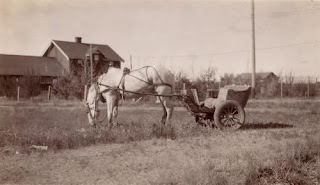 Soon the Hoover Cart took off and made its way as far north as Canada (where they where called Bennett Buggies after the Prime-minister). Throughout the 1930's the Hoover Cart became a symbol for may of the pain the Great Depression caused and for others, as a political symbol for change. Parades and rodeos where organized throughout the country, and Presidential candidates referenced them in speeches. but more on all that later.

As the country began to emerge from the Depression Americans were obsessed with making grandiose predictions about the future. At the 1939 World's Fair in NYC GM unveiled their exhibit entitled "The Futurama" which was a large scale model of their vision of the future world we would all inhabit and how the automobile would make it all possible. And in a way, they were right. After WWII the automobile made this country. Massive government investment in the highway interstate system (which was basically the largest subsidy ever handed out to business) created suburbia, and led to the very American Dream of a two car family, the house, picket fence, dog named Spot. At one point the 1950's 1 in 7 jobs were directly related to the auto industry. AAAAhhhh the golden age of America. In 1953 the slogan "As General Motors goes, so goes America" was said with pride.

We have had our ups and downs since then but something happened in the early part of the 21st century as Americans again went on a consumption rampage speculating on housing with the assistance of easy credit. At this time of record financial gains, the auto industry began producing ever extravagant cars and SUVs. These huge American gas guzzlers became a status symbol in society leading to increased demand for oil and fuel prices soared.

So with our very American idea of Manifest Destiny, we meddle in any country that has oil and send our men and women into harms way so that we can continue consuming almost 80% of the worlds resources. But how long can that last?

As the current economic crisis has unfolded, GM, Ford and Chrysler have run their companies into the ground by producing these cars, yet they requested billions of taxpayer dollars in bailouts. When GM rolled out its new 2009 line up of cars, it still includes the HUMMER at 9 MPG and the Cadillac Escalade at 12 MPG. HUMMER has since been sold to the Chinese (no small irony there) and GM is in bankruptcy. "As GM goes, so goes America"

But it is not entirely their fault, they were after all giving us what we wanted.


SO, BACK TO THE FUTURAMA
Taking the logic of the past and putting it in the context of our current economic and environmental disaster, I am making my own satirical prediction of the future- Unless we come up with alternative fuel sources and rethink our reliance on a hyper inflated consumption based economy; we may be left with no other options than to hook our cars up to a horse.
As a symbol of this I am going to take either a Cadillac Escalade or HUMMER H2, which have become a monument to America’s consumption, greed and arrogance, and convert it to a horse cart. The cart will maintain all its former glitz and glamour: chrome, rims, GPS, working sound system DVD player, and TV screens, but will be pulled by a horse.

So my friends come with me on the ride of a life time as we go BACK TO THE FUTURAMA! 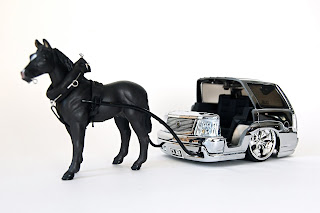 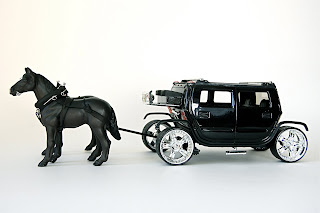 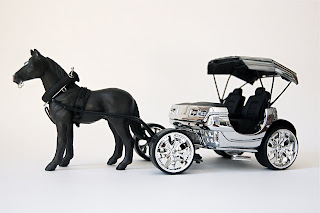 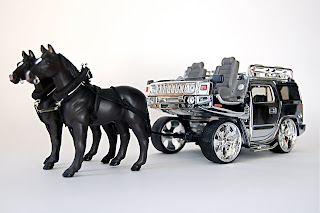 BACK TO THE FUTURAMA from jeremy dean on Vimeo.