skip to main | skip to sidebar

Is seams that compromise has become such a dirty word. As we sit on the brink of default both sides are claiming the moral high ground in a gamble of mutual destruction otherwise known as Washington politics. 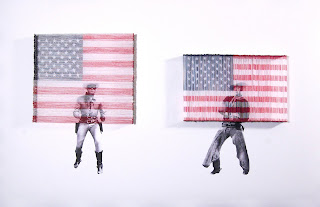 This images is from a new body of work that confronts the growing polarization in America: economically, socially, politically. I have been taking American flags apart string by string completely separating them and making two flags out of the vertical and horizontal strings. The strings are threaded through a needle, placed over polarizing imagery and presented as a diptych.

Here we have two quintessential uncompromising American "good guys" sticking to their guns, in a good vs good scenario where the only victory is mutual destruction, raising the question of the ultimate good of uncompromising. 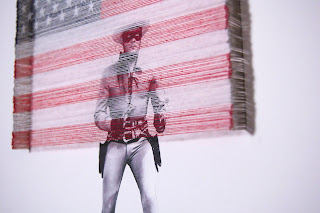 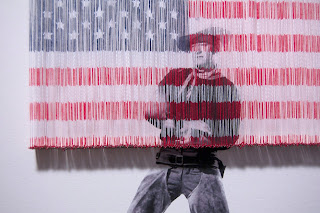